In stock
$169.95
Add to Wish List Add to Compare
Email
Skip to the end of the images gallery 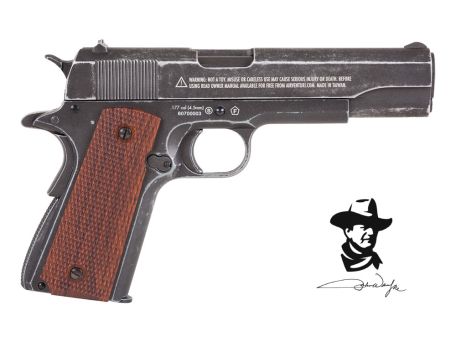 Throughout his iconic film career, "The Duke" embodied the spirit of true American grit, individualism and bravery. From the sands of the American West, to the Sands of Iwo Jima, John Wayne captured hearts worldwide and portrayed courage in the face of all odds, as only he could. To honor the Duke's legacy, Air Venturi is proud to announce the Officially Licensed John Wayne Commemorative 1911 CO2 air pistol.

An icon in its own right, the Colt 1911 was carried by American servicemen from 1911 to 1986. Recognizing the appeal of this historic weapon, Air Venturi, has faithfully adapted the 1911 for use with .177 caliber ammo. This one-of-a-kind collector's item features John Wayne's signature emblazoned across its sturdy metal slide, which blows back when fired. Once loaded up, this 1911 is capable of sending 18 BBs downrange at speeds up to 320fps. This 1911 kit includes 100 BB's so you can get right into the action.

Hold on to your hats pilgrims, you're in for hours of fun on the range!